'Inside Tennessee' to focus on presidential race aftermath 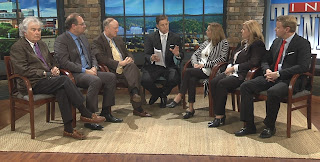 A super panel of local Democrats and Republicans on Sunday’s edition of “Inside Tennessee” on WBIR 10News will touch on election night 2016 and the aftermath of the presidential race.

The subject? Breaking down an election in which Republican candidate Donald Trump defeated former Secretary of State Hillary Clinton to become the nation’s 45th president.

Panelists note that all but three counties in Tennessee went to Trump with some 2.3 million citizens statewide voting. Knox County had a record turnout with 184,000 residents casting ballots.

The 30-minute political and public affairs program, which was taped Wednesday, kicks off at 9:30 a.m. Sunday on WBIR.