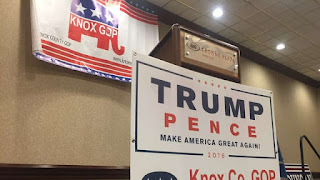 Republican Donald Trump has  been elected the 45th President of the United States after taking the red state of Tennessee, and has scored more than half the vote over Democrat challenger Hillary Clinton in Knox County after almost all precincts have reported.

With early voting results tallied, the Manhattan billionaire has secured about 59 percent of the vote among Knox County residents with the former Secretary of State receiving about roughly 35.5 percent.

Tennessee has voted for the Republican presidential candidate since 2000.

"It's impossible for him to lose in Tennessee and Knox County," said Dennis Francis, a Democrat, former member of the Knox County Election Commission and a local political commentator. "The only person who could beat him is Peyton Manning. I'm just trying to be realistic about it."

Statewide, Romney defeated Obama with 59 percent of the vote.

Statewide, McCain won with 57 percent of the vote.

Even Tennessee school students this year picked Trump over Clinton.

In the first-ever statewide student mock election, Trump received 53.1 percent of the votes compared to Clinton’s 34.3 percent, according to the Tennessee Secretary of State.

Roughly 166,000 students from 479 Tennessee schools participated. That included students in preschool through high school took part from public and private schools, along with home school associations across the state.