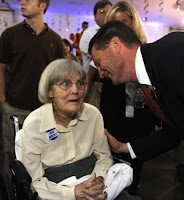 His mother, Joyce, passed away earlier today. She had been ill for quite some time and entered a hospice a few weeks ago.

I talked to Tim briefly earlier today and he told me that “she’s now in heaven.”

And she was really cool. I met her twice. A very nice lady and a career educator. She also knew how to fly a plane and did so in the 1940s!

She will be missed.

The mayor, understandably, will be spending time with his family.

In a released statement administration Chief of Staff Dean Rice said: This is certainly a sad time for the mayor and his family, as well as for the many people in Knox County who knew Mrs. Burchett. I hope the community will keep the Burchett family in their prayers in the days ahead.

Mrs. Burchett was married to Charles R. “Charlie” Burchett Sr., a longtime chairman of the old Knoxville school board and a retired dean at the University of Tennessee. He passed away in November 2008.

Mrs. Burchett was born Jan. 9, 1924 in Cheatham County and graduated from Cheatham County High School. She earned a degree from the University of Tennessee and later worked at TVA during World War II. But, she spent most of her career teaching at Young High School, Bearden High School and Knoxville College.

Mrs. Burchett, who married her husband after the war, was a member of Ossoli Circle, the Daughters of the American Revolution, the Bearden Retired Association of Teachers and Grandmothers at Prayer.

She is survived by her daughter Joyce Burchett High and her husband; son, Charles Burchett Jr. and his wife; son, Tim Burchett and his wife; and six grandchildren.

A memorial service will be held in the sanctuary of Cedar Springs Presbyterian Church, 9132 Kingston Pike, on Monday at 7 p.m.

In lieu of flowers the family said donations can be made in her memory to:

Or donations can be sent to:

“In Memory of Joyce Burchett”

Our thoughts and prayers are with you and your family Mayor.