Well, it wasn’t exactly a Donald Trump-like  meltdown on the Twitterverse because, well, almost no one can be as stupid and ridiculous as Trump and the dead animal that sits on top of his head, (how many times has be filed for bankruptcy and why is he still allowed a credit card again?), but Knox County Mayor Tim Burchett – a well know twittin’ Twitter-er (yes he does his own tweets) on Friday night had a few things to say about the University of Tennessee.

The tweet in question: “I need to get him some tats and a criminal record so UT will be interested.” (He was no doubt referring to the troubled football program. (“Troubled” being generous. How about that Kentucky game last year. Bwahahahahahah.) 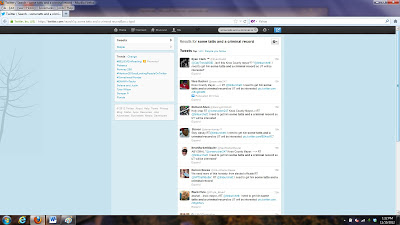 The mayor, of course, was writing about his nephew, a senior who plays quarterback on the Christian Academy Knoxville football team and is a finalist for Mr. Football. The kid is a stud. (CAK also beat up on Alcoa last night by the way.) And he’s certainly better than that pretender who can hit a car with a beer bottle on a Friday night but can’t manage to find his wide receivers the next afternoon.

Anyhoo, Burchett quickly took down the tweet, but not before a number of folks retweeted it. One person said it wasn’t smart of him, another thanked him for his honesty and another told him to “stay classy.” Whatever. You got to see the stuff I have to remove sometimes. Heh.

“I pulled it down pretty quickly,” the mayor, who has almost 1,800 followers on the social media site, told me this after. “I was just being funny but everyone went ballistic. I didn’t think anyone read that stupid thing. It was probably up for about five minutes.”

Course in all the outrage, no one seemed to notice all the nice stuff he said about veterans.
Posted by Mike Donila at 10:24 AM

...and? Regardless of anyone's feeling toward politics OR University of Tennessee football, the fact remains that UT still has that appearance to other teams in the NCAA. That's what we get for hiring that one f&^%tard from California... what's his name.

And, of course, for allowing Fulmer to establish that hands-off culture with the players in the first place.

My big question to Burch would be: Why would you even want your kid to play here? We suck. Get him to a decent school to play, because no decent school would retain a coach that's 4-17 against his own league and 0-FOREVER against Top 25 schools.

Oh, and the four that were butthurt about the original tweet?

Get the hell over yourselves. Seriously, I've never seen anyone THAT easily offended and I've been around both Pam Strickland and Hubert Smith.

(Never be around both at once though. Yeesh.)

Dude. What's up with your comment module? The first double-post *was* my fault, but the rest haven't been. :-p