$100K Haslam donations: Just how Knox County schools are putting it to use 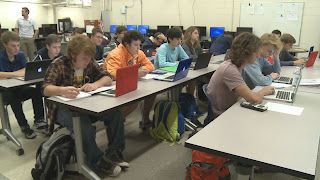 At Bearden High School, educators are looking to build a new future for the students through engineering, specifically robotics.

The move comes roughly a year after members of the philanthropic Haslam family and Pilot Flying J gave the Knox County school system $10 million. The bulk of the money – $8.7 million – was set aside to provide synthetic turf fields and some running tracks at the county’s 13 high schools.

But, lost in the headlines was another $100,000 donation for each of the system’s 13 traditional high schools to use for academics.

“When the money came along, I was just like, ‘This is unbelievable – this gift just fell in our lap – hey, here’s the chance to do something,’” said Bearden High School principal John Bartlett. “That’s one-time money to start up a program that’s going to help a lot of students.”

As it stands, school leaders submitted proposals to the Haslam family earlier this year, detailing how they would use the money.

The school system is now putting together a report that should be complete some time in December.

“There's a lot of flexibility that's been given to our school leaders,” interim Knox County Schools Superintendent Buzz Thomas added. “That's the way we're trying to run the school district: we're trying to make decisions as close to the action as possible, and that's the way the Haslam family did this gift."

A majority of the money so far has gone to technology, according to a WBIR 10News analysis of the expenditures.

Some of the money will pay for instructional coaches and tutors and some will support career readiness programs through field trips, job shadowing and student internships.

"We're on a track over the next 3 years to have one-on-one technology in each school and each student's hands,” Thomas said. "This gift gave a lot of schools the opportunity to kind of surge ahead."

The money also enables schools to continue to update what they have.

“When we opened our doors in 2008, all of our technology was new,” Hardin Valley Academy principal Sallee Reynolds said in a letter to the Haslam family in February, adding that the school plans to spend its money almost entirely on new computers and laptops. “Eight years later, many of our teachers are still using the original laptops that have been serviced several times.”

Rest of story, with details for each school, RIGHT HERE.