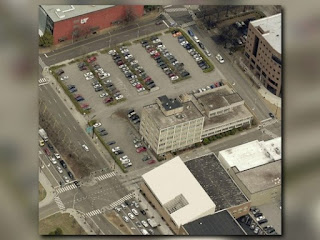 Four builders submitted proposals to begin a major much-talked about key development project at the site of the old state Supreme Court in downtown Knoxville.

The city several months ago began the bidding process, asking builders to submit plans. The proposals were opened on Monday morning.

The city by law only has to say who bid on the project and does not have to disclose any details about developers would like to do.

At issues is the almost two-acre site at 710 Locust Ave., which the city bought for $2.47 million last year.

It’s been mostly used for parking in recent years.

Here’s who submitted proposals:
The site also includes a 52,776-square foot facility – the court house and an adjoining 6-story brick building. The courthouse, which features large expanses of East Tennessee marble and glass walls, opened in 1954.

The adjoining building serves as the main state office building until the 1980s.

According to the city documents covering the bidding process, officials want a developer to buy the site and then development someone.

The documents suggest that the area “will play an important role in continuing the momentum of downtown redevelopment efforts.”

It also notes that the city seeks “the establishment of a transformational anchor to an emerging district.”

The documents note that nearby the site, developers have built some 225 condos and 642 new apartment units in the past decade.

“This development should create a sense of place that is attractive to residents seeking an exciting urban lifestyle, while building on Knoxville’s unique historic fabric and growing downtown culture,” the bid documents state.

The city's purchasing department and an evaluation team of city leaders will vet the proposals and take more with the builders in the coming months before making a decision and negotiating a contract with the winner.

Officials said they hope to have a formal proposal in front of the Knoxville City Council for approval by the end of the year.

The developer who is picked is expected to begin construction within 12 months of buying the property and must complete it within three years of the start date.
Posted by Mike Donila at 1:28 PM