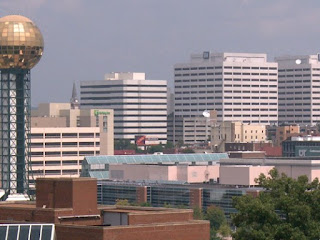 Knoxville is celebrating a big milestone Monday: Its 225th anniversary. The party started early, though, with events all around town during the weekend.

Excitement was building downtown for the anniversary. People were abuzz with dancing, singing, enjoyment of the sights and sounds Saturday night. The following Sunday night, Mayor Madeline Rogero attended a number of events, including a special dinner and fireworks show on the Gay Street Bridge.

"It's never been done before. The Gay Street Bridge, since it's opened, has not been closed," Liza Zenni with the Arts and Culture Alliance said.

Zeni said the last 25 years in particular saw the transformation of the city into what it is today.

"Knoxville has been experiencing a renaissance. Our downtown looked nothing like this 25 years ago. It was a ghost town, and now it's hopping nad popping every day, all day," she said.
The city closed the bridge between Blount and Hill avenues from 6 a.m. until midnight Sunday. The sidewalks there were also closed after 6 p.m.

Today, the city will continue the celebration with a number of events. The Historic Homes of Knoxville will be hosting a Founder's Day luncheon at 11:30 a.m. at The Foundry in World's Fair Park. WBIR's Bill Landry from The Heartland Series will be the guest speaker at that luncheon.
The Tennessee Theatre just got done celebrating its 88th anniversary Sunday. It will be hosting Mighty Musical Monday starting at noon. Doors will open at 11:30 a.m.

As Knoxville celebrates its past, community leaders are looking to the future.

"The most exciting thing that we've yet to see is what's going to happen between now, and the 250th anniversary," Zenni said.
Posted by Mike Donila at 7:45 AM