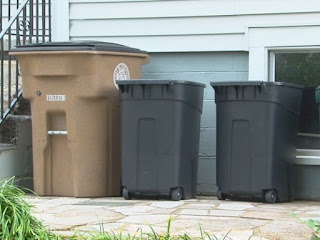 The Knoxville City Council is expected to vote Tuesday night on a new waste management provider.

The Public Service Department is asking the city council to approve a $2.9 million contract with Waste Connections of Tennessee, Inc., which is the city’s current provider.

The city wants the contractor to provide collection for household garbage and recycling materials for a seven-year term with three optional three-year renewals. The contract term could potentially last 16 years.

Tuesday’s vote comes two weeks after the city council voted to allow the city to purchase about 62,000 95-gallon trash receptacles.

Each homeowner will receive a new 95-gallon trash cart that trucks can lift instead of workers under the new plan. The 95-gallon cans replace citizens’ four 32-gallon can that are currently permitted.

City leaders said the plan will save Knoxville about $2 million per year.

The Knoxville City council meets at 6 p.m. ET Tuesday at the City-County Building.
Posted by Mike Donila at 7:44 AM