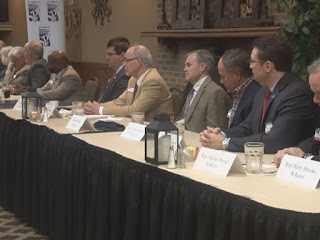 On Saturday afternoon, a panel full of lawmakers came together to address issues they're representing this legislative session in front of journalists who cover the issues they discuss.

More than 70 people attended the East Tennessee's Society of Professional Journalist's annual legislative luncheon.
"This was one of the largest crowds I've seen at this gathering and it's that the general public is really engaged in what's happening right now in Nashville," Representative Eddie Smith (R-Knoxville) said.
With the legislative session underway, lawmakers addressed plenty of issues on the table, including highway infrastructure, gas tax, open carry law and seat belts on school buses.
"We need to do something but the question right now is what do we do?" Smith asked regarding seat belts on school buses.
Smith said having seatbelts on school buses sounds great, but lawmakers have to look further into the law, not only because of the cost, but because of potential negative consequences.
"Whenever we look at a law, we have to look at what are the intended but what are the unintended consequences of any law," he said.
Representative Bob Ramsey (R-Maryville) says it will take research to figure out what's best.
"Then it's up to us to find the funding and the revenue to pursue whichever statistically is the best solution for the safety of our students," Ramsey said.
Another hot topic brought up was a letter sent to the president of the University of Tennessee opposing job outsourcing plans.
"They are not asking for much. They are asking for job security and they are proud to serve the State of Tennessee so I think it's only right to support those that have been working so hard for the university of Tennessee and other state institutions," Rep. Rick Staples (D- Knoxville) said.
From seat belts to outsourcing, the conversation on big issues continues for these lawmakers in Nashville as the legislative session has just began.
"It's important that they get to see who we are a lot of times it's just a name and see what we think about certain events, certain topics, and laws that are coming into place or action or consideration," Smith said.
Posted by Mike Donila at 5:21 PM