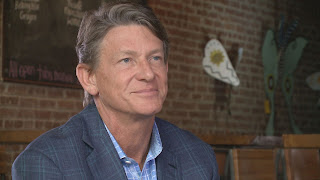 Knoxville businessman and baseball team owner Randy Boyd “is considering” plans to announce his 2018 candidacy for governor within the next month.

The move comes as the longtime philanthropist and Republican steps down as the state’s economic and community development commissioner to return to the private sector.

"Most people are encouraging me to run, so it's something I am considering,” Boyd told WBIR 10News Monday. “It's a big sacrifice but there are so many things Gov. Haslam has started like the ‘Drive to 55,’ like the commitment to helping our rural communities. I want to make sure that momentum continues. If I were to run, it would be to make sure that happened.”

Other top Republicans rumored to make a run at the job include two members of the U.S. House of Representatives – Diane Black and Marsha Blackburn – and state Speaker of the House Beth Harwell.

In addition, state Sen. Mark Green, R-Clarksville, has filed the paperwork to run.

On the Democratic side, Nashville Mayor Karl Dean and Nashville businessman Bill Freeman are rumored to join the fray.

The gubernatorial general election is set for November 2018.

Boyd announced last week that he was stepping down from his job as Haslam’s go-to person for economic growth and development in order to return to the private sector. He leaves at the end of the month.

Haslam, a former Knoxville mayor, tapped Boyd in 2013 to serve as a special adviser in higher education, part of a strategy to boost post-secondary training of the state's workforce.

Haslam has previously credited Boyd with bringing some 50,000 jobs to the state and $11 billion in capital investments.

In 2013, he served as the special advisor on higher education to the state where he spearheaded the Drive to 55 initiative and Tennessee Promise.

Boyd told WBIR that on Monday alone he was approached seven times from people asking him his future political plans.

He told 10News that he plans to take the first couple of weeks of February to decide if running for governor is right for him.

He added that at one time he felt campaigning was tedious, but he now feels it’s a way to meet people around the state.

"The more I've thought about it the more I've thought about it it's really governor training school,” he said. “You're basically spending your time out talking to people. If I were to run, I know I'm not the best speaker in the world, I'm certainly not the best debater. But I'd like to strive to be the best listener. Just being able to travel around the state and be a great listener and hearing people's concerns I think it would be really fun and rewarding. I think it might be something I would really enjoy.”
Posted by Mike Donila at 1:31 PM