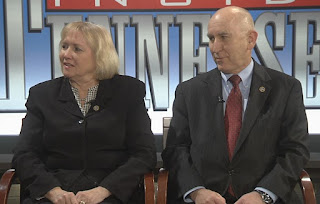 State lawmakers keep talking about a so-called $1 billion surplus, but two key members of the local Legislative delegation say the number is more a myth than a reality.

As it stands, the state might have roughly $925 million in extra money this year, but much of it has already been allocated.

The topic is part of this Sunday’s edition of “Inside Tennessee” on WBIR 10News.

The discussion comes as the General Assembly convened on Jan. 10.

Briggs and Massey didn’t want to get into too much detail, but both agreed that there is roughly “$100 million to $150 million” that hasn’t been allocated.

“I call (it) a little bit the myth of the myth of the one billion dollars,” Briggs said. “At this point, there’s going to be about $200 million – I don’t want to go into some of the details – that’s going into education. We have some of the built-in increases that happen every year due to the TN Care increase and we forget that with this affordable care act, we had about 60,000 or 70,000 people that were in the woodwork who are eligible for TN Care that never signed up for it. They’re forced to do that now or they’ll take a penalty.”

He said money also will go to “completely fund our retirement fund” and paying “back the other half that we borrowed back earlier in the 2000s when we had some deficits from the road fund.”

“We did half of that last year – we’re going to do the other half this year. That’s no secret. That’s about a 120 or $130 million . . . and then we have the investments we need to make on building maintenance that’s been delayed over the years,” Briggs added. “One other thing when we talk about all of this money that’s important – we do have some cash in hand but much of those are projections and we really don’t know what’s going to happen to the economy. If it projects out then we will have more money but it’s all not discretionary that we can spend.”

Massey said the surplus came from a “combination of fiscal responsibility” and revenues from business growth.

“Part of the surplus is in recurring dollars which there is a number of pots that almost take it before we even get to look at it . . . and then about half of it is non-recurring, which can be used more for short-term projects,” she said. “But I can guarantee you there’s a lot of people who have some wonderful ideas and significant needs and we’ll have to look at what’s the best return on the investment.”

The 30-minute political and public affairs program, which was taped Thursday, kicks off at 9:30 a.m. Sunday on WBIR.

WBIR Anchor John Becker serves as the show’s moderator.
Posted by Mike Donila at 11:31 AM