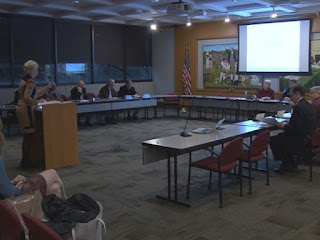 On Thursday night, Knoxville's beer board met to address what they say is a community health concern - minors across the city buying alcohol at an alarming rate.
According to the Metro Drug Coalition one third of Knoxville high school students reported trying alcohol.

"There’s not one particular area this is a citywide problem,” said Beer Board Chairman Brenda Palmer.

The Metro Drug Coalition presented KPD data comparing compliance rates in 2015 and 2016 that reflects the number of businesses cited for selling alcohol to minors. The number of beer stings went up by more than 100 when comparing the same time frame.

"We want businesses to be successful in the community but they also have a responsibility to the community,” said Metro Drug Coalition Executive Director Karen Pershing.

Businesses that sell to minors are subject to fines and stiffer penalties for repeated offenses.
Along with MDC, two groups presented plans to help Knoxville businesses check IDs and stay on the right side of the law. Along with new technology board members also discussed increasing fines and deterrents to stop businesses that continue to break the law.

"You can prevent a lot of this by training your employees on the front end,” said Pershing.

According to a city study, the businesses most likely to sell to a minor aren't liquor and grocery stores, but bars and restaurants where people consume alcohol on site.
Thursday's meeting began the process of forming a better plan to combat what the beer board says is real public health issue.

"You’re not a minor's friend if you provide them beer wine or liquor,” said Palmer.

On Feb. 7, the beer board will view the permit for a South Carolina business looking to come to Knoxville. The business wants to allow self-serve craft beer. But Tuesday night the city council will consider an ordinance that would ban self-serve beer.
Posted by Mike Donila at 7:50 AM