Henley Bridge to be lit in honor of Trump presidential inauguration 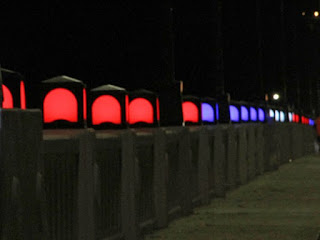 Get ready for a patriotic showing on the Henley Bridge.

Knoxville Mayor Madeline Rogero announced Thursday the city will light the busy downtown bridge in red, white and blue in honor of the presidential inauguration.

Plans call for the bridge decking to be lit Friday, Saturday and Sunday.

Donald Trump will become the nation's 45th president at a swearing-in ceremony that begins 11:30 a.m. Friday outside the Capitol. You can watch the event on 10News and live on wbir.com.

For example, the decks were lit in orange at the beginning of the month in a nod to the University of Tennessee's appearance in the Music City Bowl. Last week it featured royal blue hues in honor of Dr. Martin Luther King Jr.

Next month, plans call for lighting Henley Bridge red for National Wear Red Day; green, gold and blue in honor of the Bassmaster Elite Series; and red and white for Valentine's Day.

Henley Bridge also has been lit for sad occasions. Knoxville was among several American cities that received national attention in April after it displayed purple lights on the bridge upon the death of Prince, who loved the color purple.
Posted by Mike Donila at 7:08 AM