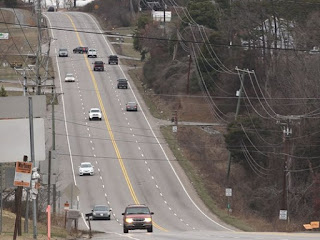 Anyone who regularly drives the 10 mile stretch of Chapman Highway from South Knoxville into Seymour knows it needs upgrades.

TDOT cites "safety" as the reason.

Every day, tens of thousands of drivers flood that corridor. TDOT says more than 30,000 vehicles travel the north end on a daily basis and more than 22,000 vehicles pass through the southern portion.
The corridor in question stretches from Blount Avenue in South Knoxville, just across the Henley Bridge, to Boyds Creek Highway in Seymour, touching parts of Knox, Blount and Sevier counties.

"We have a lot of traffic flow on this highway and makes it a very dangerous highway," Tim Geagley said.

He would know a thing or two about safety. He's a firefighter and advanced EMT with the Seymour Volunteer Fire Department, as well as a Sevier County 911 dispatcher.

"Chapman Highway is one of those roads where we have worked an accident, like, every hundred yards along its length," Geagley said. "There's been an accident at some point along the whole length of this highway."

With no designated left turn lane along much of the route and some tight bends and hills, it's no wonder why TDOT lists "safety" as the reason for needed improvements.

"I believe we work at least one to two accidents per week on this stretch of road," Geagley said.

Haslam is proposing a gas tax increase - the first hike in nearly 30 years - of 7 additional cents for a gallon of gas and 12 extra cents for diesel.

"I'm in favor for that," Geagley said. "If it's going to, you know, help with the safety on this road, yes."

In both roles, he said, he's in favor of improvements to this stretch of Chapman Highway.

"There's a lot of commercial property that's available on the Chapman corridor, from John Sevier down to Highway 411," he said. "If they get this done, get the left turn lane in, that would open up more businesses for safe travel."

It won't be a swift process, however.

"Any time construction goes on, local businesses usually suffer because of reduced traffic," Linsenbigler said. "I look forward to the finished product ... It's not going to happen quickly because of the amount of below utility and infrastructure they have to put in."

TDOT estimates the cost of the Chapman Highway improvement project at nearly $45.3 million.

Altogether, Haslam said, the gas tax increase would raise an estimated $278 million to fund 962 road projects across all of Tennessee's 95 counties.

The governor hopes to have most of the backlog construction projects at least underway within six years.
Posted by Mike Donila at 7:12 AM