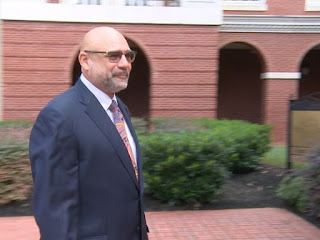 Former longtime state Rep. Joe Armstrong was sentenced Wednesday to three years of federal probation for tax fraud and ordered to pay back the money prosecutors say he failed to report to the IRS in 2008.

After the 90-minute hearing, defense attorney Gregory P. Isaacs said he was “very pleased” for Armstrong and his family, noting that “the courtroom was packed with his friends, supporters, family members that traveled from all over the country, community leaders.”

“I think it was a very fair and just result based on the applicable considerations under federal sentencing,” Isaacs said. “There were two different sides of the courtroom, obviously the United States thought the sentence should be higher because he was an elected official public official, our position was much different. Joe has been a public servant. He’s not a professional politician, he’s someone that helped individuals tirelessly in his community for 28 years. And those are factors the court is required to consider.”

Armstrong, too, weighed in, saying he wanted to “thank the people for their support, prayers and reaching out particularly not only to my family my church family and the community, for their entire support.”

Prosecutors were initially seeking as much as three years in prison for Armstrong.

Last month, however, the U.S. Probation Office – using guidelines to determine his sentence – calculated a much lower penalty range based on the amount of taxes lost to the IRS.

Prosecutors argued Armstrong cheated the government out of more than $100,000, an amount that carries a stiffer sentence. The court, however, sides with Armstrong, finding that the lost was just under that at $99,943.

That $57 difference meant the ex-state representative was looking at a maximum of 21 months in prison.

A federal jury in August found the East Knoxville Democrat guilty of filing a false and fraudulent tax return, a felony, after prosecutors argued that the ex-legislator failed to report taxes on a $312,000 profit he made from selling cigarette tax stamps in 2008.

A month later, Armstrong officially retired from his 15th District the state House seat that he held for almost three decades.

Because he's a felon, Armstrong can no longer hold public office again.