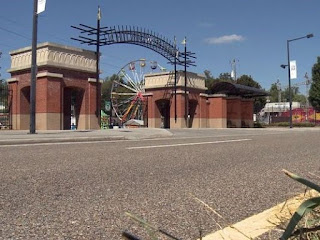 Knoxville leaders have worked out a compromise with a Loudon County woman who sued the city in October 2015 after officials declined to allow guns inside Chilhowee Park.

The lawsuit, filed in Knox County Circuit Court on behalf of Pandora Vreeland, requested that the court issue a declaratory judgment to allow those with valid carry permits to "possess their firearms" inside the park.

It was filed after the Tennessee Valley Fair, which operates each fall at the park, concluded.

At issue is a Tennessee law that says someone with a gun carry permit can bring a weapon into a state or city park so long as it’s not close to a school. City leaders and fair operators, however, said the law does not apply to the fair.

City leaders noted that Chilhowee Park’s name indicated it was a park, but that it was actually an exhibition center.

The agreement between the city and Vreeland was reached Thursday afternoon.

It essentially says that handgun permit holders are allowed to carry handguns in all outdoor facilities of Chilhowee Park so long as there is not an event.  Guns are prohibited in the public assembly buildings like The Muse, the Jacob Building, the Kerr Building, Homer Hamilton Theater and Golden Gloves Arena.

Guns also are prohibited in Chilhowee Park’s outdoor facilities during events so long as the event includes an admission charge, armed security and entrances that are marked with signs stating that firearms are not allowed into the event.

In addition, handguns are prohibited in Chilhowee Park when the outdoor facilities are limited only to those who are invited to the event by a sponsor, such as a private club using the area. Again, however, for such events, the entrances must be secured against entry by the general public and marked with signs stating that firearms are not allowed inside for the event.

The Tennessee Firearms Association filed a similar lawsuit against the city. That one hasn’t been settled.
Posted by Mike Donila at 12:43 PM