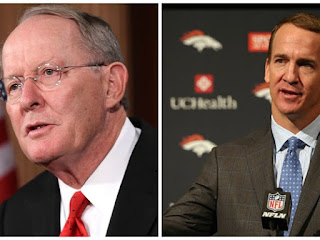 U.S. Senator Lamar Alexander's office on Friday denied a report published in Politico that he will not seek re-election. The same report suggested that "several Republicans are wondering whether Peyton Manning will run" for that seat.

In fact, Tom Ingram, a top aide in Sen. Alexander's office and one of his longtime campaign leaders, told 10News he and the senator have already begun discussing the 2020 re-election bid.

Even though he has made no formal decision to run, Senator Alexander has already begun fundraising for that campaign, according to a statement from David Cleary, his chief of staff.

As to the mention of legendary Vol quarterback Peyton Manning, who retired from the NFL last year, he has not indicated any interest in getting into politics.

Manning did speak at a GOP retreat on Thursday, though that event was not open to the press.

Manning, a popular figure in Tennessee, owns property in the state where he played college football before heading to the NFL.

Cleary acknowledged Manning's popularity in his statement, though didn't comment on his political aspirations.

“Like everybody else in Tennessee, Senator Alexander is a big fan of Peyton Manning," he said.
Posted by Mike Donila at 12:46 PM