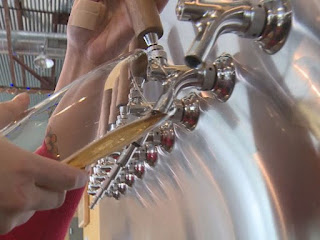 Tuesday night's Knoxville City Council meeting featured a spirited debate over ordinances regulating who can and cannot pour a beer.

A group of hopeful Knoxville business owners tried to explain the potential new market at the two-hour meeting.

"It’s not a free for all. It's not open taps where you pay $20 to get in and you drink until you fall down," said Pour Taproom founder Nate Tomforde. "That's absolutely not what it's about."

Pour Taproom operates in three cities, and a group of owners wants to put a new one in Jackson Terminal in the Old City. Their proprietary technology allows beer drinkers to pour and pay by the ounce. Encouraging sampling, but cutting users off once they reach a certain limit set by the business.

"I don't think any of us were familiar with a self-pour bar,” said Councilman George Wallace.

After discussion, the city council voted 8-1 to postpone the voting on the ordinance in hopes of crafting an ordinance that would better regulate this type of business.

"The stop-gap measures they've put in to protect themselves and protect the public, what they've come up with is very ingenious,” Wallace said.

"It’s kind of flattering, that they're looking at us as a model of how they'll shape the ordinance in the future,” said Pour Taproom Knoxville CEO Joel McLead.

The group behind the Knoxville location will continue working in hopes of opening in the spring.

"The lease is signed, the coolers are ordered and the taps are on their way,” said McLead.

If the business opens before the new ordinance is approved, they will have bartenders pour beers, which would require more man power. However, McLead said that's not going to stop the business from opening.
Posted by Mike Donila at 6:30 AM